For the past several years, I have been bugging my mother to buy me a sewing machine. I’ve always been a bit craft-oriented, and having taught myself knitting, crochet, macrame and a number of other skills over the internet, learning how to sew actual clothes was high on the priority list. All through med school, my mother kept putting me off, citing the fact that I was way too busy studying to ever use a sewing machine (which was true, or at least would have been true if I actually studied as much as I should have).

As you guys know, I took this year off and was spending time at home. Well, a few months back, one of my mother’s friends heard about my hankering to learn sewing. She agreed to lend me her sewing machine.

And thus I was finally able to indulge my passion.

Since youtube is still blocked, I used blogs and tutorials to teach myself sewing (I’ve always been loath to take formal classes if I can learn things off the internet). I found this excellent step-by-step tutorial for kameezes, written by an American who’d moved to Pakistan. With it, I stitched my first, wonky, imperfect effort:

The neckline and edges were seriously wonky, lol. That’s because I really couldn’t sew straight seams back then. But I still kept trying. I wanted to try something simpler, so I used a very simple tutorial for peasant blouses to make this nifty thing: 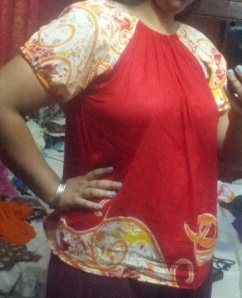 I was still stitching wonky, but slowly, slowly I got better at it. This was my first perfect kameez: 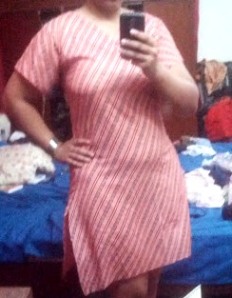 As you can see, the seams and neckline are much straighter (and I’ve lost some weight, hehe). After this one I stitched two more in succession. The blue one had matching lace lining. The yellow one I made out of a dupatta, and those lines you see on the sleeves is basically the ‘peekoo’ on the edges of the dupatta, which I stitched together to make a longer sleeve. Pretty, na? 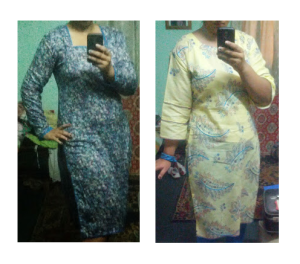 Since I’d managed to prove that my passion for sewing was not a passing craze, and since I couldn’t go on using my aunt’s machine forever, my mother finally relented and I bought this beauty.

Isn’t he gorgeous? I love him. The Singer 8280. It’s the cheaper of the two easily available Singer lightweight models available on the market and it’s super easy to use. The guy at the store actually gives you a little tutorial before you pick a machine and it has all sorts of attachments for seam sewing and buttonhole making, etc.

It’s not perfect (the collar is a bit too big) but definitely wearable and I’m very proud of myself for it. I love blouses but the kind in stores are rarely my size or as well fitted and there’s just a sense of accomplishment in making something yourself. So I’m happy ^_^

I’m going to continue making things, although now I’ve mastered the fundamentals I feel a lot more comfortable and less obsessive about making one thing after another.

Anyway, so this has been my creative journey in sewing which I thought I’d share with you guys. I’ve been doing other things as well, that I’ll talk about in future posts. See you guys soon!